THE WORLD RECORD FLIGHT OF THE GARBAGE TRUCK

On September 19, 2005 Guiness World Records has confirmed  that the Garbage Truck Jump has been certified as a record of 77 feet 4 inches set on June 22, 2004 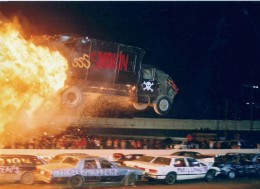 . This world record jump was performed at the Lebanon Valley Speedway in West Lebanon, New York during the EVE OF DESTRUCTION night of racing. This stunt was one of the many stunts performed by Crash Moreau's THRILLMASTERS.

The flight of the WORLD RECORD JUMP OF A GARBAGE TRUCK with pilot Wildman Al Sleep on June 22 of 2004 was designed by Crash. Crash did all the engineering of the 8 foot high dirt ramp and set up all the pyro for the jump. Al jumped a total of 77 feet 4 inches landing on top of a parked car.


The year after touring with the Canadian Auto Circus, the owner of the show Fransouis Boivan decided he wanted a Cannon Act like his uncle had back in the 50's so he called upon Crash to design him a cannon. So Crash flew to Montreal and designed Fransious the World's Largest Cannon. It was bigger than the one the Joie Chitwood's show was touring with. After designing the cannon it was over 4 years before he had a chance to jump out of it. The cannon was now on Paul Riddell's Imperial Hell Drivers Show. A few years later Paul sold the cannon to a farmer and demolished it for use as a culvert on the farmers land in Ontario.

After a few years I caught this picture of my finished project on the Imperial Hell Drivers Show at Plymouth, NH. At the time Serge Belieau was jumping out of the Cannon.

Crash Moreau's newest crash act is called THE TORPEDO CRASH. This act was first done in Quebec, Canada by Canadian Stunt Driver Greg Riddell of Ontario. But in the years after, Crash has taken it up a notch. Crash now stacks the cars higher and even explodes everything  into a ball of flames. As he goes thru the wall of cars even his car explodes. Crash is also the only stuntman that has done a plain TORPEDO CRASH with a convertible.

The STEEL WALL CRASH was first done in the US by Crash Moreau in the early 70's. since that day Crash has developed over 35 different ways of performing this spectacular act that has been copied by many. This act was originally done by the Unbelievable Lessard Brothers of Quebec Canada (Jacque & Louie &Guy). Ask anyone else where the act started and no one can tell you the place or by who. Most will tell you it was their idea. A STEEL WALL is where you stand a car on it's rear end and than take a stock auto and drive into the bottom at a high rate of speed and flip the standing car over the car that you are driving. Hopefully the car will not fall on top of your car. Crash was the first American stuntman to perform this act in a convertible and 30 plus years later he still uses a convertible if the price is right. This stunt may look simple as many has tried the stunt and have been hurt while performing it. Some seriously. Crash has performed this act over 1,000 times in his career and only banged his arm once. 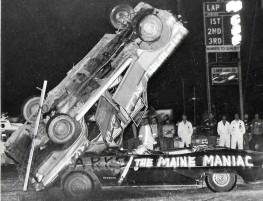 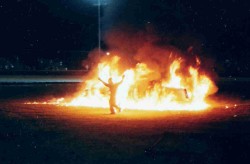 The Captain Explosion's Dynamite Car is where Crash Moreau will set explosive charges in and around a stock junk auto and literally blow the car up into a ball of flames while he or a fellow THRILLMASTER will be inside of the passenger compartment. As the car is engulfed in flames our Thrillmaster will step out of the car and now perform the Human Torch act of being on fire and running down the track to the safety crew as he uses no fire protective clothing or gels. This act was first done by BOOM BOOM KOSKIE who did not come out of the car on fire and later was done also with out being on fire byDave Rigby and Frank Parks. Frank later died while performing a crane drop in Kentucky. The first stuntman to perform this act coming out on fire was Texan Gary Beall. One day Gary called Crash up and asked him to cover for him at a date in Michigan which he did after Gary told him how to set the act up on AT&T. The above pictue is one of Crash's Thrillmasters, Rocky Hardcore Hauri at  Thunder Cross Speedway in Florida 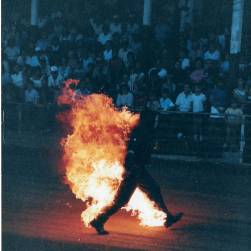 This stunt is known as THE HUMAN TORCH. It was first done on the live touring stunt shows by Gary Beall of Texas. Jim was the second stuntman to perform this act at fairs and racetracks in the US.  Jim uses no fire protective clothing or fire gel like the Hollywood Stuntmen use in the movies as the cost of such Gel is cost prohibitive. The only protection that he uses is 3 layers of cotton clothing socked in plain water and a nomax head peice. Jim is literally on fire that is burning over 1,500 degrees. Hot enough to have a wennie roast. A HOT TIME!!!!

Crash Moreau has a register trademark of CAPTAIN EXPLOSION when he performs this act. Jim is seen below wiring what he calls the COFFIN OF DEATH. Jim will place at least a pound of explosives inside of this box that will be about 18 inches from his head when he sets off the charge while laying inside of it. When the Coffin blows apart he will literally be thrown away from the place he had been in and knocked unconscious from the explosion taking away all the air that was around the blast. The Captain has performed this act over 500 times in his career with only one injury at the old JFK Stadium in Phillie.

Crash Moreau was the first stuntman to perform the Flaming House Crash. Since those early days he has had many stuntmen perform this dangerous stunt.

The Flaming House Crash is where the Thrillmasters builds a 12 foot by 12 foot tar paper shack with a 4 foot high hip roof. The shack is placed some wheres near the race track. At show time the shack will be saturated with at least 10 gallons of high octane gasoline and ignited. Then a Thrillmaster will drive thru the inferno with a possibility of exploding the car on the way out. Here is a few stuntmen that has performed this stunt for Crash :  Rocky Hardcore Hauri, Wildman Al Sleep; and Wackie Wes Rankin.  The picture above is  Rocky "Hardcore" Hauri  performing at Thunder Cross Raceway in Florida. .

Crash Moreau is one of a handful of today's traveling stunt performers that is an accomplished new vehicle Ramp to Ramp Jumper in a stock vehicle. Rather it is in a car or pick-up truck, Crash will leap it some 50 feet thru the air from one ramp landing on to another and driving the stock automotive vehicle away in one piece. One mph too fast and he will over shoot his ramp and land on the ground. One mph too slow and he will hit straight into the end of his receiving ramp and the possibility of the wood coming into and thru his vehicle.

The biggest divebomber crash of North America came from Crash Moreau in the late 80's when he built a 12 foot high ramp on the back of a school bus to jump a stock automobile off and fly into a row of parked cars. His first jump off this ramp was at Verdun, Quebec, Canada for the Canadian Auto Circus in which he jumped this bus over 50 times in 2 months. This picture was his first jump in the US at the Unity Maine Raceway.