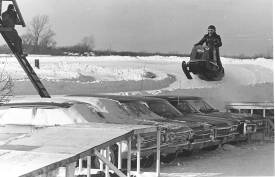 In the mid and late 70's there was a handful of snowmobile jumpers touring the US. This is one of Crash Moreau's jump taken place in Appleton, Wisc during the USSA oval race programs. Jim was jumping a 440cc Alouette Snowmobile with bogie wheels.  A few years later Jim jumped 10 cars on his sled off an 8 foot high take off ramp. Other jumpers at the time was Perry Kerry, The Silver Bullit Randy Hill, Terry Star. A few years before there was a complete stunt show that had Polaris snowmobile performing many different stunts including jumps. If anyone has any material or pictures of this show please let me know.

The Flaming Divebomber was first done in 1972 on the new Deathriders Motorcycle Thrill Show that was out of Danville Illinois. The owner had the idea of setting a car on fire and than crash it into another car. Crash told Floyd Reed that he could do it even at the time he had no experience in big car crashes. Jim checked around with fellow stuntmen he had known threw out the years. One told him not to even try it another one who you would not likely listen to told him exactly how to do it and it was the same way that he was going to do it and it worked. Crash filled the trunk of a stock automobile full of hay and having someone set it on fire he would drive the car completely around the racetrack than leap it off a small ramp fly 50 feet thru the air landing onto of a parked car. After over 300 crashes he did get one injury of a small burn on his stomach when some burning hay landed on his lap while on fire so he couldn't get his seatbelt unbuckled. Crash was the first stuntman to do this act and also had more of this crash under his belt than anyone else. Others that had done this crash was Floyd Reed, Rusty Smith, Joe Byars, Danny Reed, and a few others that all worked for the Death Riders. 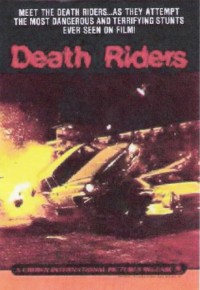 This is the cover, of the VHS tape that has been sold thru out the US, that you can see Crash Moreau perform in along with the Motorcycle Stunt Show of the 70's The DEATH RIDERS that was based in Danville Illinois. In this video Crash performed his one of a kind roll-over crash only wearing his crash helmit and cowboy boots. (THE NAKED ROLL-OVER). Oh! By the way the video is PG rated and was seen in the theaters and drive-ins starting in 1976 and 1977 before going to VHS. This is a real  thrill show collector's addition for all fans if you can find a copy. Keep an eye out for this or the movie DEATH DRIVER starring Earl Owensby that also featured Crash Moreau and the Death Riders a year later. 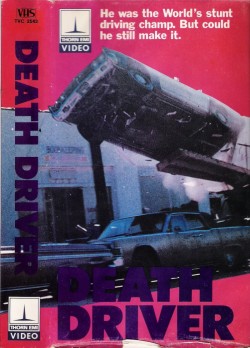 With the first year of the Death Riders Motorcycle Thrill Show in 1972. Jim became the first succesfull jumper on the show. With the first jumper of Al Chebot crashing 4 of his first 5 jumps and going home with 2 broken collar bones nobody wanted to jump. After bugging Floyd the owner to buy him a 350 Honda motorcycle that he saw at a motorcycle shop out west and backing from Rusty Smith and Danny Reed he reluctantly agreed and bought the cycle on the condition that he would jump it every night. That night Jim went out and lined up 3 cars and jumped over the hoods, the next night he cleared 4, the next night it was 5 cars and from than on it was night after night of doing this stunt. After weeks of not crashing Mark Brassel wanted to jump so Mark became the next succesful jumper but he did hit long a few times and bent the frame of the cycle. This picture is of Crash jumping over the cars at the Kansas State Fair in Hutchinson in 1972 with Rusty "Squeeks" Smith laying on the hood of the car. This was the featured jump on the Death Riders that first year out.