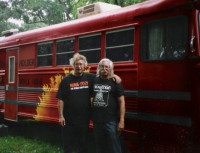 Doug "9 Toes" Marble broke his record of 9 flaming barriers by crashing thru 10 at Garden City, Minn in june 2006

Film crew from Award Productions of Bellrica, Mass who is producing a documentary on Hell Drivers does an interview with Crash Moreau in front of his junk yard art at his Jim's home in Lincoln, Maine. From left to right: Darrin, Crash, Peter.

A firery explosion on impact of the bus hitting the camper tailers. 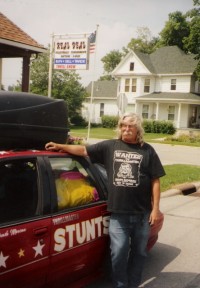 Crash was followed to the THRILL SHOW MUSEUM in LaPorte City, Iowa by the documentary film crew from Award Productions of Mass who is doing a documentary on HELL DRIVERS.

In August I sent Hot Rod Productions posters, bumper stickers, and t-shirts of the THRILLMASTERS for use in there production being filmed in Vancouver BC.

I went to the World's Fair in Tunbridge Vermont. The local radio station personnality (standing) was interviewing the person sitting in the chair (live on the air).

The line up of Mustangs for the Imperial Hell Drivers Show in Rochester, NH